I’ve been MIA for a while now. A bit of writers block.  The past few months I have been feeling a lot of inadequacies at my job. I’ve felt a lot of blame and criticism from one of my coworkers that has fed my stories of “you are inadequate” and “you aren’t smart enough” and my personal favorite “you will never be good enough”. In addition, I work in a very demanding financial industry where we are in the midst of our busy season. It seems that no matter how much I put in, I’m failing in some way. If I spend lots of hours at the office, I feel I am failing as a mom. If I put in my normal hours, I feel I am failing at my job. Any way I slice it, I see failure. Those stories of “you are inadequate” and “you will never be good enough” continued to grow.

I took two days off work to go to a women’s retreat and getting to the retreat was quite the ordeal. I realized as I was getting things ready to leave that this career path wasn’t working for me. The amount of drama and pressure that was mounting for missing two days of work was overwhelming. I acknowledged again the reality that my current career doesn’t align with my beliefs any more. I used to believe that success was measured by how much money I made and by what my job title was. I don’t believe that any more. Success to me is found in fulfillment and by giving back to others. Finding purpose in life rather than just living life. For a while, my job gave me the financial security to find my passion in other ways. That worked for a bit, but I’m realizing it doesn’t work for me now. I need more. I need to feel like I’m making a difference in the world rather than just “working for the man”. I need to feel like I am helping others around me and I want to see the names and faces of those I am helping. I wasn’t sure where this would come from but I know I needed a change.

At the women’s retreat we talked about fear. One of the questions that was posed was “What would you do if fear didn’t hold you back?” My immediate response was “I would get a new job.” To be precise, the response is really “I would change career paths.  Fear has kept me in this job for longer than I’d like to admit. Fear of what will happen with my current job (I currently work for my brother). Fear of what others will think. Fear of what a new job/career move would entail. I might not love my current job but I know what to expect. Fear of how this job change will affect my family, my finances. Most of all, fear of failure has been my biggest fear.  Fear of wanting something so badly and not getting it. Fear of putting myself out there and being rejected. Fear of not being “good enough” or “inadequate”. All the things I’m already feeling currently. It’s as if I would rather feel the inadequacy and not good enough I already feel than branch out and reach for something more.

So the question was posed, my answer was given. And as only the universe can do, it gave me something to grasp. I went to my room to journal about what we had just talked about and happened to check my email. There, in big letters from an organization I am passionate about were the words “Position Opening: Local Service Director”. This was like manna from heaven. The universe’s way of telling me it had heard my answer and it too wanted something more for me. Could it be? I looked through the job description and realized….I wanted this. BAD. This job is literally my dream job. In the past, my desire would have created a fantasy that included me getting this job with little to no preparation, and it was magically mine because I asked the universe for it. And then, when it didn’t happen. The self fulfilling prophesy of “I can’t ever get what I want” was fulfilled.

But I want this job. I want it bad. I put together a new resume, cover letter, and got my letters of recommendation. I did what I could. And the universe responded. Again. My daughter got a scholarship at our local university and we went to an awards brunch. We sat down at a random table and made conversation with the people we were sitting with. One man was a professor at the university and talked about some humanitarian work some of his students were doing. He said to come talk to him about humanitarian work if I was interested in a career change.  I figured he was just being nice and didn’t really think much of it. After leaving the brunch, I googled this man’s name and lo and behold, he wasn’t just a professor but the executive director of the university’s community service center. Universe wins again!

I emailed him my resume and cover letter and he responded quickly, kindly, and with additional information. He said to come visit him any time and he would be happy to help me in my search of a more rewarding community oriented career. It was as if the universe was telling me that even if the job that originally started this quest didn’t work out, there were other rewarding pieces to the puzzle being put into place. There were other options for me. It wasn’t the dream job or stay in my current job. There were variables in between.

So I started just looking around at other job posting, and applying for random jobs, in the event my dream job didn’t pan out. And I started getting calls and interviews. In my entire 39 years, I think I have had 3 job interviews and all of them were before the age of 21. My entire adult life has been owning a business and working for my brother.

I interviewed for jobs I didn’t really love. I looked at it as experience.  Each of the jobs I interviewed for, I wasn’t real excited about. They were jobs I wasn’t sure I would really take if offered. Yet, when I wasn’t offered these jobs, the old stories of “you’re not good enough” and “you’re incompetent” were playing on repeat in my head. In addition, there were several jobs I applied for but was never called to interview. These stories only grew stronger.

Yet having job interviews for jobs I didn’t really feel passion around was helpful. In some ways, it was as if they were the warm up for the main event. Finally, after several weeks of waiting, I got the call to interview for my dream job. And by this time, I had been through several types of interviews. I had been through a behavioral interview. I had been through an interview with the entire board of an organization. I had been on phone interviews. Interviewing wasn’t so scary to me anymore because I had some experience. I walked into the interview a bit nervous, but calm. (I know it seems paradoxical) The interview was organic. Real. It felt more like a conversation than a job interview. And when I walked out, I felt confident in how I presented myself. I don’t know if that means I will get this job or not, but what it does mean is that I know I gave it my all. Fear didn’t hold me back. Fear of being “not good enough” or inadequate didn’t win.

Deciding is freedom. Indecision is torture

When I wasn’t sure what I wanted,  I let fear lead the way. For years I’ve been unsatisfied in my career but felt like it was all I could do.  Torture is a great way to describe what I was feeling. It was as if what I wanted was just out of my reach and I couldn’t find a way to get to it. Fear had a big hold on me and I felt powerless in it’s grasp.  Deciding that maybe I could do something different but not making a decision was torture. Making the decision to do whatever it takes to find a new, rewarding  job was freedom.

It got me thinking, indecision has been torturous in every aspect of my life.  When I’m indecisive any way, fear gets in my way.  It’s like I’m telling fear that it still has a chance. When I’m indecisive I let fear win.  When I make a decision, I chose freedom. That doesn’t mean that every step of the way will be a breeze or that I won’t continue to need to make the same decision over and over. When I made the decision to live a life of recovery, I found a new freedom. Prior to that point, I wanted recovery but hadn’t made the decision to do whatever it took. I was indecisive. I wanted it some days, and didn’t on other days. Living my life with one foot in recovery and one foot in addiction was torture. I never felt settled or secure in what I was doing. Once my decision was made to really live in recovery, whatever that took, I felt a freedom I had never known. Admitting powerlessness was an incredible relief. When I made the decision to turn my will and life over to the care of a Higher Power, I found a new freedom. I didn’t have to feel in control any more. I didn’t need to worry about every aspect of my life and the lives of those around me because I had a Higher Power that was taking care of it all. I could relax and let my Higher Power do his thing. That didn’t mean that I wasn’t invested in my life or the lives of those I loved, but that I didn’t run the show. Deciding was freedom.

I’m not sure what the next few weeks will bring. I am not sure if my “dream job” will pan out. What I do know is that I have made a decision to make a change, and I am leaving the results of that change to my Higher Power. He’s pretty awesome at taking care of me.

YOU ARE WORTH RECOVERY!

Worth Recovery exists so that every woman who wants to do the work it takes to recover can have access to the resources they need to lead the healthy and fulfilling lives they desire. Explore the website, attend an event, catch a podcast episode, join a coaching group, or share your story with us. Together, we recover! Join the mailing list and stay up to day with Worth Recovery.

Find what you’re looking for: 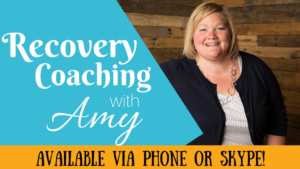 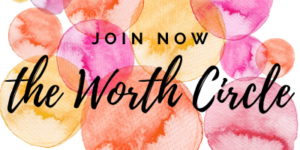 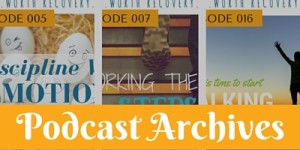